Back to Back Lake Terrell Champs – Kyle Linderman and Robert Gray

In Western Washington, there’s one lake that gets everyone in the northern counties more riled up than any. Lake Terrell is home to a large and healthy population of largemouth. No deeper than 10ft, the lake warms up faster than most in the state the and the bass get their chew on early. In late March and early April both the PondJumperz and Borderline Bassin’ clubs hold a very popular and competitive team open! On a small lake, with a lot of boats, the fishing gets really cramped and guys are forced to make big adjustments to boat fish. This year

was no different in the competition, with a field full of stout lake Terrell sticks. In both tournaments, the anglers faced a high-pressure system, unfavorable winds, and massive boat pressure, making the fishing tough… with very few limits coming to the scales. But in

back to back tournaments, two young anglers rose above the rest to win both of the events! Locals, Kyle Linderman and Robbie Gray, pulled together multiple 19+ pound bags of largemouth in the challenging fishing conditions to take home two early season wins.

Tell me about your experience on Lake Terrell in the past and how it helped you for the tournaments?

“We have been fishing Lake Terrell since we were kids. Over the years, we have seen this lake go through its ups and downs, but this time of year in particular can be really hit or miss. With this knowledge, mentally we were prepared for some really tough fishing and that was a big part of our success on tournament day. Being patient and willing to fish slow, despite the heavy boat pressure and poor conditions can be mentally taxing.”

What was your practice like for the first event? And what is your process for practicing on Lake Terrell?

“For the first event, our practice was pretty tough. In the few weeks leading up to the event, the bite had been really slow. The fish just seem to be a little bit behind. Most of the times that we went go out, we would only manage to get a few bites, but they were the right size of fish. Our practice really helped us hone in on one area in particular, where a lot better population of fish were pulling up.

“Typically on like Terrell we don’t to worry too much about stinging fish because in such a small and shallow lake, there are different waves of fish pulling up and down pretty constantly. But we have noticed over the years that some areas tend to hold better fish than others. Because of this, it is really important for us to figure out where those bigger fish are located in each given year. We won’t lean on the fish by any means, but if we catch one we take note of how big it was and keep searching for more.”

Walk me through the first tournament, how did you target your fish?

With such a large turnout, Kyle and Robby knew that they weren’t going to have the ability to move around a lot. So, the team decided that they wanted to commit to their best area, where they had the majority of their bites in practice. “We ended up staying in one spot for almost the entire tournament and caught all of our fish out of it. With the conditions, we couldn’t get the fish to chase any moving baits in the first hour, so we decided to really slow down and pick apart the area that we were in. All of our fish ended up coming on a black and blue jig and a black and blue Texas-rigged worm. The key was to fish them painfully slow and just make repeated casts to the same areas, waiting for the right fish to show up. It was the one nice part about all the pressure on the lake… we knew that there would be boats everywhere, so our best chance was to be the only one making casts on our best spot.“

Over the course of the day, Kyle and Robby only put 5 fish in the boat, but all of those fish were the right quality… their patience paid off.

How was your practice for the event the second time around?

“The practice the weekend before the second event was off the charts. The wind was blowing pretty good but the water had warmed up a bunch. The conditions were perfect and the fish were biting like crazy! We had one of our biggest bags ever in practice, pulling together almost 27 pounds for our best five fish. And we didn’t even have a fish over 7 pounds! This helped build up a lot of confidence going into the tournament, but we knew that the event was going to be different.

How did the conditions on tournament day affect the bite in the second tournament?

“Looking at the forecast leading up to the event, we knew that it was going to be tough.” A high-pressure system, cold front, and unfavorable winds relayed a tough outlook on how the tournament day was going to shape up. “We knew that on those cold front days, it’s extremely important to maximize the first three hours of the day, especially when you are fishing shallow. Because of that, we focused our efforts on targeting our best area first... again. And it turned out to be a great decision as we put together most of our bag including a 6 1/2 pound kicker right off the bat. Just like we expected, the bite got tougher after the morning flurry, and we had to bounce around to multiple different stretches to get the limit filled out. With having an aluminum boat, strong winds can make it very difficult to fish effectively. To adjust we decided to make a move across the lake to target some areas that we had caught some fish in practice, but were protected from the wind. We then had one of us flipping a black and blue jig and the other throwing a swim jig or a spinner bait. The areas we targeted were those with a harder bottom where emergent pads could be seen coming up.”

What are some key learning lessons from your wins?

“Lake Terrell is a rather featureless lake with regards to contours. With depths not extending beyond 9 feet anywhere in the lake, subtle changes can have a massive effect. In essence, Lake Terrell is a place where a minor change canmean a major change underwater, because everything is magnified on asmaller, shallower body of water. In practice and the event, we realized that the better quality of fish were heavily related to these subtle depth changes.”

On a similar note, with the lack of dramatic contours, the bass in Terrell tend to relate to and use varying types of cover and bottom density to move back into the spawning pockets. Typically, a change in vegetation can be a good sign that there’s a change in bottom composition as well. Kyle and Robby realized that the best areas needed to have a hard-to-soft bottom transition, adjacent to a subtle depth change.

With years of experience, a good mental approach and a very specific plan, the team was able to put together two back-to-back strong performances... which is no small feat on any body of water!

If you are a bass angler in Western Washington residing in Snohomish county or north... both Borderline Bassin' and Pondjumperz are fantastic and inclusive clubs that offer a lot to their members. Check them out! 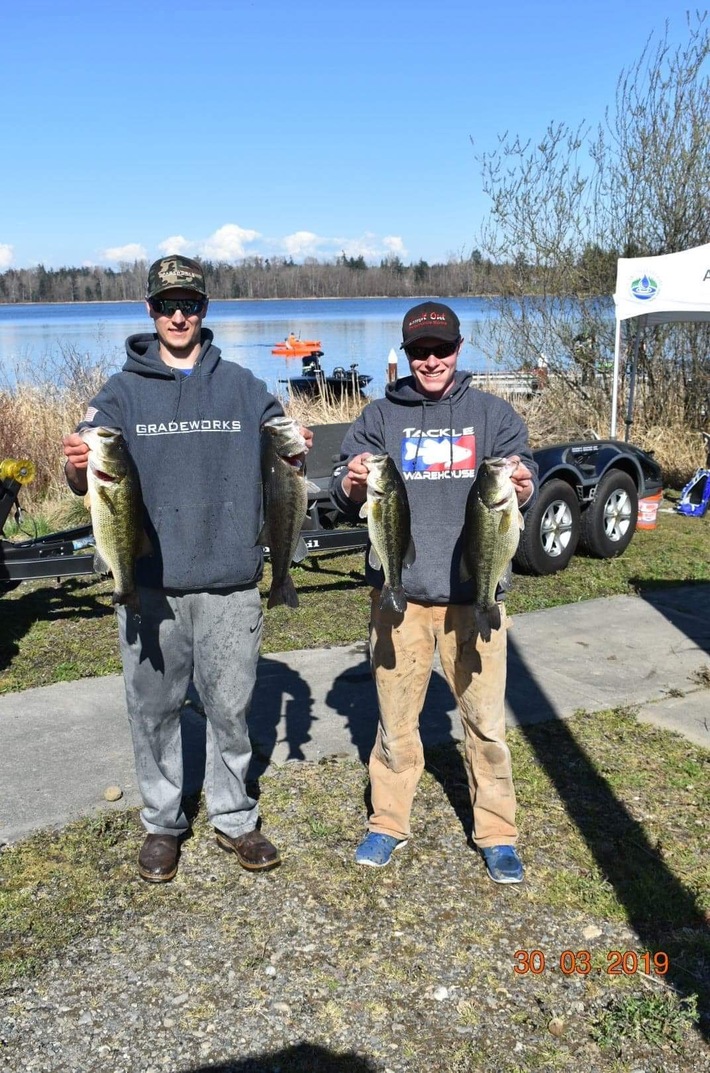