The second year of the Mike Albertson Memorial tournament was a huge success! The event drew anglers from all over Washington, with 39 teams vying for a handsome payback. Looking around the launch in the morning, one could see the faces of numerous previous tournament winners on Lake Washington. But at the scales this year, it was a different story. It wasn’t a team of seasoned vets or legendary Washington hammers that took the crown… it was two “kids”!! Kai Wikstrom and Madden Tobeck surprised the entire field by sacking an enormous 22.9 pound bag of Lake Washington bass. While they were the youngest team competing, these two showed a maturity and poise far beyond their age, both on and off the water. But don’t let yourself be mistaken, they may be young, but Kai and Madden are no strangers to Lake Washington. This last Saturday, the two college anglers burst on to the Washington tournament scene and showed everyone that they meant business!

Being young in the sport, how do you compete with guys who have been fishing for more years than you’ve been alive?

Kai and Madden both echoed the role of confidence in their first big win: “For us, having confidence was the key. This tournament field was full of great anglers, but we knew that if we fished clean and made good decisions, we could hang with them. Although we are only 20, and relatively new to the tournament scene, we have been fishing Lake Washington for years.” (Kai) We have learned that the spots on Lake Washington’s have good and bad cycles. Our vast time on the water helped us stay on top of those cycles which served as a huge confidence boost on the water.” (Madden)

What assumptions did you have as to where and what the fish would be doing at this time of year?

The young team had a very dynamic plan that involved targeting both species over the course of the day. “With the rapid increase in water temperature, we knew the smallmouth would be located in staging areas, waiting to move up and spawn. As for the largemouth, we knew that the fifty-degree water temp would be pushing those fish up shallow.”(Madden)

"Looking back at my notes over the last 4 years, the main lake water temp has ranged from 45-52 degrees during the last week of March Nonetheless, I had managed to catch quality smallmouth in the 20ft zone in all four years. From our experience, these main lake fish seem to be on a schedule and work up towards the spawning areas, despite the main lake water temperature.” (Kai)

What is your process for practicing for an event on Lake Washington/How did your practice go?

“On Lake Washington, our process for practice is fairly straightforward. We choose a few baits that will allow us to cover water effectively, and cover their hooks with plastic tubing (the kind you get with spinnerbait trailer hooks) so we don’t sting any of the fish. Then we go out to areas that we think they might be around, and start a little shallower than we would expect them, and work our way out. This time of year, all we had was a white spinnerbait with the hook covered for largemouth, and a football head with the hook covered for smallmouth. Typically, the fish on Washington are very finicky and stinging them the day before or even a week before can really shoot your chances of them still being there.

Instead of practicing for the Mike Albertson Memorial tournament, Kai fished the ABA event on Lake Washington the weekend before the Albertson. He was able to practice the Friday before the event as ABA allows for a day of practice:

Your final bag at the Albertson was a mix of smallmouth and largemouth, how did target your fish?

For the smallmouth, the team decided to run a very similar pattern to the one that Kai ran in ABA on the week before. “We fished in the east channel, as well as up north by Kirkland, targeting points in 15-20ft that had rock mixed in somewhere. The fish were typically located on the transition from the soft bottom to rock and would bite as soon as our bait would come across the rocks. We threw a variety of football heads and swimbaits because we noticed that the bigger fish were holding close to the bottom. We would throw our lures out there, let it hit bottom and slow-roll it back to the boat”

When targeting the largemouth, Kai and Madden looked up on shallow flats to find the dirtiest water that they could. Kai was throwing a white spinnerbait for most of the time that they were targeting largemouth, while Madden flipped a jig. Madden caught both of the largemouth on a dark, natural colored jig on docks and boat lifts in 4-6ft of water.”

What drove you to target both species? At what point did you make this decision?

Last year in the Albertson, Kai and Madden decided to start out targeting largemouth in the morning, and then switch their focus to smallmouth, but unfortunately that pattern only yielded 3 fish. “This time we weren’t going to make that mistake again, we wanted to catch a good limit of smallmouth first. Ultimately, we knew that during this time of year, the potential to catch giant smallmouth is always there.” (Madden) “After weighing in 20+ pounds of smallmouth the weekend before and taking 5th, we knew that we would need a kicker green to give us a shot at winning.” (Kai)

Did the conditions on tournament day affect how you fished for/caught them?

How was the bite for you? Tough fishing or a numbers game??

“Outside of a few flurries, the bite was very tough for us. We began our day with the best 10 minutes of bass fishing that we’ve ever had. We pulled up to our first spot, positioned the boat in 20ft, and started casting up to some rocks in 15ft. Then the school got fired up!” Kai got bit on his fifth cast, and it ended up being a 5.5lb smallmouth. While he was putting her in the livewell, Madden hooked up, and brought in a three pounder. Madden got bit again on the next cast, and about 3 seconds after him Kai got bit and they were doubled up. Madden boat flipped a 3.5lb smallmouth, grabbed the net, and scooped up another 5.5lb smallmouth. As Kai put the fish in the livewell, Madden fired back out and hooked into another one that was just about 3lbs. In 5 casts, the young guns had 20+lbs of smallmouth in the livewell… and it was still only 7:15am!

“After the school died down, we bounced around between a few different areas and caught a few smallmouth in the mid-3lb range and made a few small culls. At 11:00 we decided it was time to fish largemouth. Pretty quickly, Madden stuck a solid one over 4lbs flipping to a boatlift with a jig. After a dry spell with no bites, we transitioned back to smallmouth for a few hours but couldn’t catch anything that helped. With 45 minutes left, we decided to fish for largemouth again. With no more bites and a decent run to the launch, I told Madden that we needed to go, and I set my rod down… then I heard a hook set. I scrambled for the net and scooped up a giant largemouth just shy of 5lbs, a massive 1.5lb cull on the last cast!”

Reflecting on the event, what are the biggest learning lesson that you got out of the win?

One if the big lessons learned was trusting our instincts and targeting smallmouth in the morning. After getting burned the year before by targeting largemouth first, we decided to catch a limit of brown before going for largemouth, and our decision quickly proved to be the right one. The other big learning lesson was really listening to the fish – if the fish are giving you good, positive feedback early, stick with the pattern and replicate.

For someone who really struggled in the event, how would you point them in the right direction to catch a limit on Lake Washington?

“Largemouth can be very temperamental this time of year, and a lot of the ones up shallow just got there, so they can spook very easily. Smallmouth are the far more reliable option this time of year, so personally I would focus on them in high percentage areas where you would expect they might be.”

Is there anyone that you would like to thank for their support? Family, friends, sponsors, etc?

“I would like to give a huge thank you to my family first. They have supported me so much throughout this process, and it means a lot for them to be my biggest fans. I’d also like to thank my good buddy and partner, Madden Tobeck – he has a nose for finding the right fish, and I’m looking forward to fishing many more events with him.” (Kai)

“I would first like to thank my parents for supporting me so much in the sport of fishing. Additionally, I would like to thank everyone who helped me to learn more about the sport of bass fishing and how to be a better angler. Frank Murata at Daiwa has also given me an awesome opportunity to be on their staff, and I am very thankful to use such great products and represent Daiwa on the water. Lastly, I would like to thank my good friend Kai for being a great tournament partner.” (Madden)

“We would also like to thank WBA for putting on this great event and thank everyone who came out to it, there were a lot of great sticks, and the support they showed us after the tournament was really humbling.” (Both) 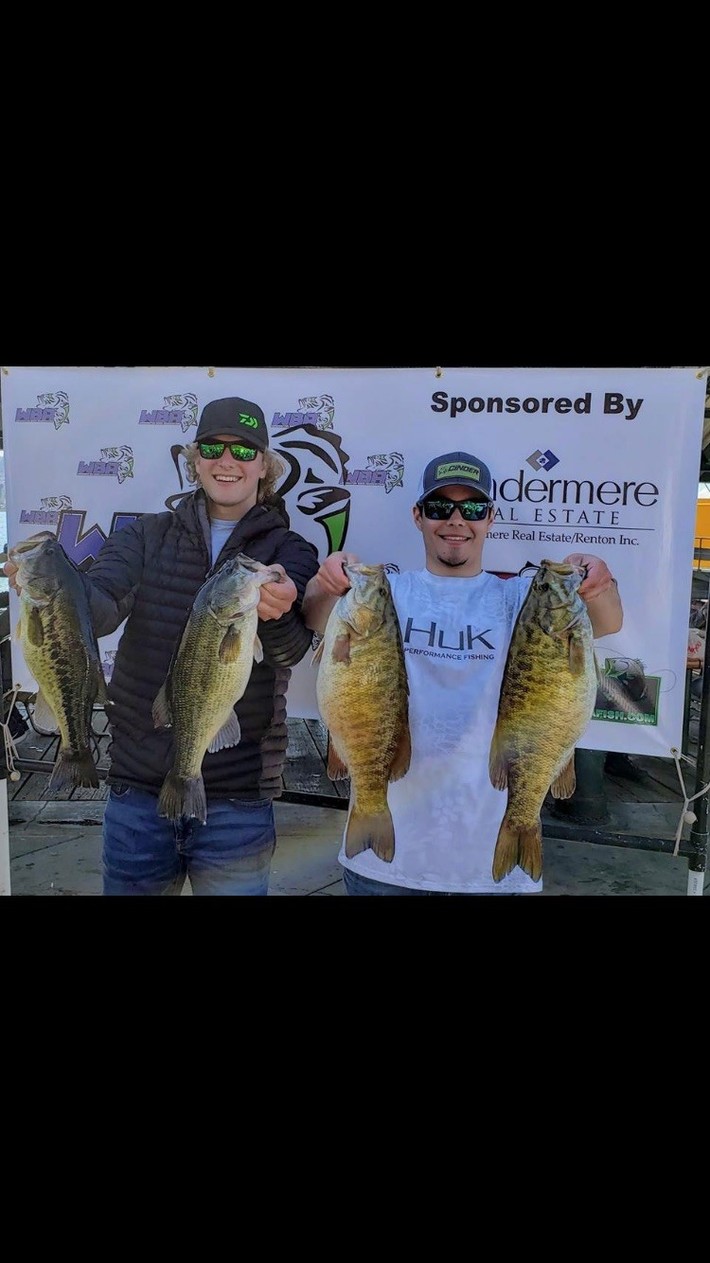