With your vast amount of history on Lake Washington, how did that help you prepare for the conditions on the lake?

“For the last several years, I have fished this lake from the end of February through October. In the last few springs I have realized that the fish on Lake Washington pull up in multiple different stages... and there are big fish in all of them.” Dave’s large amount of experience on the lake helped frame his mental approach for the tournament. Being well known for his deep-water angling prowess, Dave knew that when the water temps are in the 48-51 degree range there are smallmouth in all levels of the water column. “I knew that there would be a decent population up shallow, inside and on top of the weed line, but I also knew that there would be a lot of boats targeting those fish.” After a quick stint looking for an early morning largemouth, Dave avoided the masses as his experience and instincts told him that he should be out deep, targeting the smallmouth still waiting to pull up onto the flats. With much more confidence after his quick move to target deep largemouth, Dave’s instincts were quickly rewarded.

Did you practice for this event?

“This year I chose not to pre-fish the weekend before the event. In past years I have found very strong populations of fish, and usually some giants in practice… only to be led astray by my practice on tournament day. As the main lake temps move from about 47-52 degrees, the smallmouth on Lake Washington move rapidly, never staying in any one area for too long. Because of this I felt very confident in being able to find the fish if I approached the event with an open-mind, having not burned up any fish.”

How did you target your fish in the event?

Dave targeted his fish using a combination of bottom-oriented baits. He built up part of his bag slow-rolling a paddle tail swimbait slowly above the bottom. “The key was to keep the bait right above the bottom and retrieve it steadily with a couple pops or rod snaps to vary the action.” In the morning, the fish were very active, typical of post-frontal conditions. After the morning, the bite became much tougher and Dave mixed in a football head paired with a hula grub and a drop shot to fill out his limit. “I was targeting staging areas and main-lake points in 18-30ft outside of the bigger spawning bays. With the water temp in the high 40s to low 50s, I knew that there would be fish up shallow, but the ones that I wanted to target were ones that were still sitting off a bit deeper. Typically when a front blows through the day before, the deeper fish are less affected by the front and therefore, more reliable.

Walk us through your day out on the water:

Knowing that many of the early tournaments in 2019 on Lake Washington had taken a mixed bag, with a couple big largemouth to win, Dave started the morning out targeting largemouth. However, it only took a few minutes for him to realize that he wasn’t fishing in a manner that he was confident in, and quickly made the adjustment to target smallmouth. “It just had one of those gut feelings that I didn’t like what I was doing. The conditions pointed toward a tough day of fishing and I wanted to take a stab at putting multiple decent fish in the boat and return later to try to catch a largemouth.” Dave’s instincts turned out to be a spot-on decision…! Making a quick run to a rocky point outside of a spawning flat, Dave put five fish in the boat in as many casts, targeting the deep edge of the point, including the final one being his kicker for the day (see video below)!

After filling out his limit by 8:30, Dave realized that there was a strong population of deep prespawn smallmouth that were staging in 20-30ft, pinned closely to the bottom. He then rotated a few very similar areas that he had from his years in the past, and put a fish or two in the boat on every stop. However, Dave did have to pass up on some of his favorite spots as a strong South wind made fishing a couple of main lake staging areas quite tough. “After the morning, the wind really picked up and made it difficult to fish some of my areas, which was a bit of a bummer. It really seemed to ignite the moving-bait bite, but the bites were very subtle so detecting the fish while bouncing up and down was very difficult. I think I missed at least 4 fish simply because I couldn’t feel them bite the bait. After targeting a few other windier areas with same issues, I decided I would only target the areas protected from the south to maximize my efficiency.” Once Dave made the adjustment to targeting the areas that he could feel the bites, he made a couple of culls on his next 3 spots elevating his bag over the 15 pound mark.“ The decision to stick with the pattern that was working, while targeting areas that I could fish clean and efficiently was the biggest part of pulling the bag together.”

Are there any key learning lessons that you can point to from your win?

“There were a couple of moments in the day that really dictated how the day unfolded. The first was just trusting my instincts on the water.” While Dave knew that many of the tournaments in the prior weeks had been won with a mixed bag, he realized that he didn’t have confidence targeting them in those conditions and quickly made the adjustment to target smallmouth on his first productive spot. Another key factor for him was paying attention to how water temperature affects the fish. “Understanding the relevance of the water temperature was huge for my approach. With the main lake still in the high 40s, I knew that the bite would be tough especially with the front going through the day before. So mentally I was prepared to slow down and target some of the deeper fish. Typically the deeper fish are less affected by fronts and pressure/temperature changes.”

The final big learning lesson that Dave attributed to the win was selecting areas where he felt like he could fish efficiently and effectively. On a day that was very windy, He felt like he was missing fish when he was fighting the wind because the bite was so heavy. So to adjust, Dave targeted the staging areas outside of spawning flats that were protected from the wind. This allowed him to convert on more of the bites that he was getting because he could detect when the fish actually picked up the bait. “I felt like I missed a good number of fish when I was battling the wind but once I moved into a calmer pocket, I started converting on all of my bites and putting more fish in the boat.“

What would you recommend to someone who struggles on Lake Washington in the spring to help them put more fish in the boat?

“I would recommend spending as much time on Lake Washington as possible in May. This is the time of the year that the smallmouth pull up and spawn on the shallow flats. If someone can go around and figure out where the fish are spawning then they can use that information to aid them in the prespawn next year. Every year, the smallmouth will winter on deep offshore structure in 40-70ft, so if you know where they winter and now where they spawn, all you have to figure out is where the bass will stop between the two points. Look for main lake points, humps, rockpiles, etc. that are in between the deep winter spots and the spawning flats; that is the highway that those big prespawn smallmouth will use. Identifying the spawning areas and their nearby staging areas, you will put more of these Lake Washington bass in the boat.” 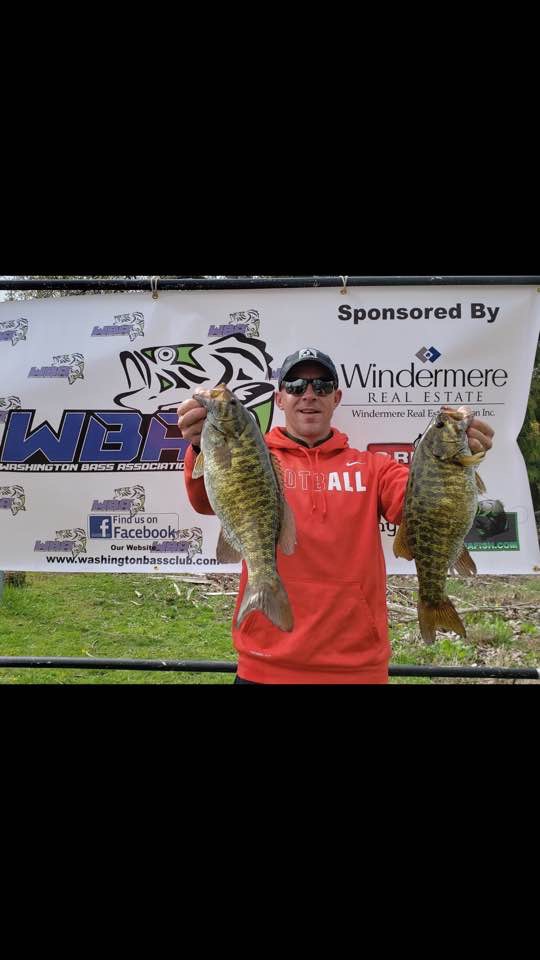