Every year, anglers from across Washington state congregate at the iconic Potholes Reservoir in mid-April to compete in the state’s longest running bass fishing tournament. Hosted by the Potholes Bass Club and Mardon’s Resort, the Potholes Open has a legacy second to none in Washington. This year, a record-breaking number of teams did battle on the Eastern Washington fishery, with 146 boats vying for the top prize and ultimate bragging rights. After two days of intense fishing in varying weather conditions, Jordan Doucet and Chad Eidson bested the massive field with a two-day weight of 38.97 pounds! See below for how they did it!

It is well-known that you two have an immense amount of experience on Potholes… so how did your prior experience affect your assumptions as to what the fish would be doing?

“We have fished 7 Potholes opens together now and have seen a shift in recent years as to which areas hold the higher quantity and quality of fish. Back then, there were days when it was tough to even get 5-6 bites. But in more recent years, we’ve seen the fishing improve drastically and our time on the water has allowed us to expand our comfort level with different techniques and areas that we feel are productive.” Ultimately the more comfortable and confident we are, the more water we can effectively run on tournament day.

In this Potholes Open in particular, there was a full moon the Friday before and a consistent warming trend leading up to the tournament. From their past experience, they knew it wouldn’t be long until the fish moved up into the shallows. “Typically when the fish first start pulling up on the flats and cruising they are extremely hard to catch (ie.Poopy Cruise). Because of this, our hope was that they would be holding out in the staging areas adjacent to spawning flats for the tournament, as they had been the weekend before.”

Did you practice for the event? If so, how was it? What’s your process for practicing on Potholes (shaking off fish, sticking one for size reference, etc)?

Jordan and Chad fished the Northwest bass event the weekend before, placing second out of the 96 boats with an amazing comeback on the second day, jumping 26 positions with a 22.5+ pound bag. “The two long days on the water the weekend before was a strong indication as to what was going on and we felt like we had a good pattern to run for the Open based on that. However, we did not practice the day before the event.”

“Our process for prefish, is to focus on locating the most quality-sized fish as possible, while identifying the types of specific cover that the fish are holding on. With Potholes being a highly pattern-able lake, identifying this allows us to replicate and can expand to other areas that are similar. During practice, shaking fish off is a common practice, but if we are prefishing the weekend before we will occasionally hook one to confirm size. However, the day before we will never hook any of the bites we get – in fact we cut the hooks off of all our lures or at least cover them with rubber tubing during these prefish sessions.

“Every year, we hear of a few big fish being caught the day before the event. We believe that sticking these fish the day before really hurts your chances of hooking them again the very next day. I’m not going to say that that fish 100% will not bite again, but I am certain that it doesn’t help the cause. Another key component to shaking fish off is that you can generally get an indication of size based on the bite and how they swim with it… even without ever seeing it. If you apply the little bit of pressure while they are swimming with the hook-less bait, you can gauge the weight of the fish. You can also learn a lot from how long a fish will hang on to your bait as to what sort of mood they are in. For example, if they hang on to it for a long time, they are probably chomping pretty good; if they bite and spit it out quickly, they are probably in a more negative mood and not actually feeding.“

What was your plan before blastoff? Did it change over the day?

“We had planned on throwing a combination of reaction baits and flipping around the outside of spawning areas. We actually stuck with both throughout the day and just “junk-fished” our way to 20+ pounds on day one. We didn’t keep count exactly, but I’m guessing that we caught somewhere around 20-25 fish on day one.”

“On day two, we found that the fish had settled into the “Poopy Cruise” pattern and we even saw a handful of fish on beds. Although we were able to coax a couple of them into biting on finesse techniques, that is neither our strength at Potholes, nor is it a good way to get the quality of fish you need for a good bag in this event. We decided to make a move out towards the main lake to find fish that weren’t as far along in the spawning process. We ran across a couple good stretches of deeper willows out towards the main channels and main lake and ended up culling out nearly all of our fish from the morning, resulting in our 18.7lb bag.

How did you catch/target your fish in the tournament?

“We caught all of our fish on either a spinnerbait, chatterbait or flipping a jig/texas rig. Normally this time of year we’d mix in a swimjig or swimbait, but we felt that the water clarity hindered that bite for us, certainly in some areas that had the Pea Soup green color to it… it just never produced.” A large majority of the team’s fish on the first day came on deeper structure that was very near a shallow spawning flat. The key was to find cover in those areas and the fish would hold tight against it. However, on the second day the bite changed a lot for Jordan and Chad and they moved farther out to the main channels to find their prespawners.

What sort of cover or combination of cover and structure were you targeting?

“We targeted a variety of cover that was near the deep breaks adjacent to a shallow flat. We believed that the best quality of fish were holding a little deeper, waiting to move up. As such most of our quality bites came out of deep willows and floating wood near these transition areas from shallow flats to deep.”

Did the weather affect the patterns you had in the tournament? How did you adjust?

“A steady wind on day one led to us throw reaction baits all day as that bite never seemed to waiver. Also, since the fish were feeding well, we increased the weight on our jigs/texas rigs to get a better presentation in the more favorable conditions. On day two however, we only caught a couple fish on reaction baits. The lack of bites on moving baits led us to make the adjustment to flipping, once we made this change, most of the fish we caught for the rest of the day were flipping.

Outside of the weather, what adjustments did you guys have to make on the water?

One of the major adjustments that Jordan and Chad made was in the location that they were targeting their fish. They wanted to target fish that were more on a prespawn pattern than those that were up on the flats spawning or fanning. “Although it was difficult to move away from the areas that were so productive the prior tournament weekend and even day before, we knew it was necessary to make a big change to find fish that were going to give us a chance to win.”

Differences between day 1 and day 2 of the tournament?

“The fish went from their pre-spawn staging areas on day 1 to the “poopy cruise” and spawning on day two in the backs of the dunes. When the fish are in that “poopy cruise” stage, they are very hard to catch, despite being able to visually target them. To adjust we moved further out, trying to find the fish that were in the next wave of prespawners.”

What would you recommend to someone who struggled in the event or struggles on Potholes in the prespawn to help them put fish in the boat?

Is there anyone that you would like to thank?

“First and foremost, I would like to thank my partner Chad for his dedication to this event and time on the water in general. We both spent the two weekends prior to this event on the water including the Friday prefish for NWB. But overall, Chad puts as much time in on Potholes preparing for a tournament as anyone so he just has a knack for lining up what’s going on and has an incredible bank of knowledge on areas in the lake to replicate a pattern. Thank you also to Chad’s wife, Emily, for putting up with me 3 weekends straight at their house!” (Jordan)

“A big thanks to Three Rivers Marine and Tackle for getting my motor rebuilt this last winter. I have had zero issues with anything after the rebuild! Also thank you to Nixon’s Marine for installing new power poles and dialing in the small details on my boat very quickly.” (Jordan)

“Most importantly, thank you to my wife and kids for putting up with 3 straight weekends of fishing away from home. Win or lose, I know I can come home to a smiling family when I get back and that’s a big WIN!” (Jordan)

“I’d like to thank the Potholes Bass club for putting on the Potholes Open.  This is one of the tournaments that I look forward to every single year. I’d also like to thank Jake Boomer at Alpha Angler rods. Jake is a great guy and is building great rods that really perform on the water. We use a ton of Alpha gear and really put it to the test.” (Chad)

“Most importantly, I’d especially like to thank my wife for always supporting my fishing.  She gives me the green light to spend the long days prefishing and fishing tournaments while holding down the house when I am gone.  I feel very lucky to come home to my wife and daughter at the end of a long day.” (Chad) 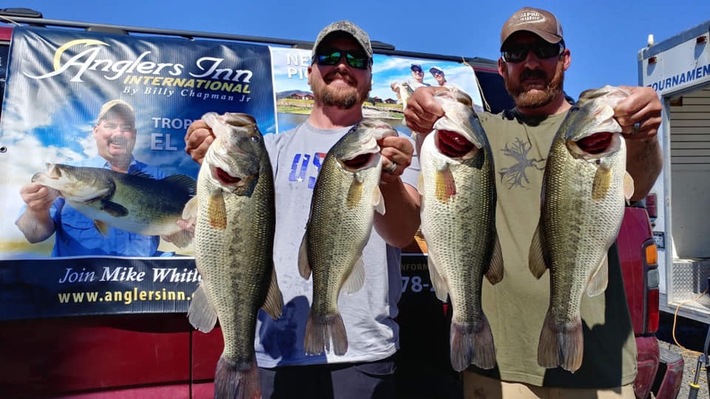